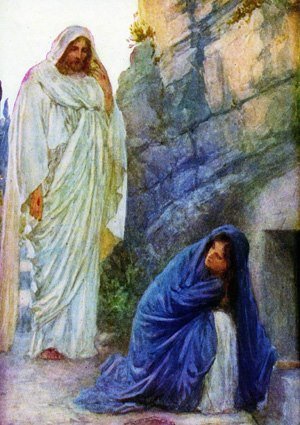 She was carrying a gift, but she didn’t expect a party. Mary Magdalene had risen early that Sunday morning while it was still dark to go to the tomb where Jesus’ body had been laid following his death on the cross. Her grief was overwhelming as she hurried to take spices and aloes to place on Jesus’ graveclothes. Never before had she felt so alone and helpless.

Oh no! As she approached the tomb, the large stone which sealed the entrance had been moved back. A quick look inside revealed that the tomb was as empty as Mary’s hope. Heart pounding and legs running at olympic speed, Mary ran to Peter’s house and awakened him with her hysterical announcement: “They have taken the Lord’s body out of the tomb, and I don’t know where they have put him.”

The next few minutes were just a blur to Mary as she tried to keep up with Peter and John as they ran back to the tomb. She was so absorbed in her own grief and disillusionment that she didn’t even notice the change in them–full of wonder and urgency to hurry back and tell the others what the angel inside the tomb confirmed–that Jesus was alive!

As Mary stood outside the tomb crying, she decided to look inside once more, but was so disoriented she didn’t realize the two “men” inside the tomb were angels. Suddenly someone appeared behind her and asked, “Why are you crying? Who are you looking for?” She thought he was the caretaker of the cemetery and begged him to tell her where he had taken Jesus’ body. Not until he lovingly spoke her name did she know it was Him. All her grief and doubt were replaced with irrepressible joy and contagious gladness. Hewas alive!

There were many other places Jesus could have chosen to appear, but nowhere better than a tomb to demonstrate His ultimate power over death and hell. Max Lucado writes, “God is at His best when our life is at its worst. God has been known to plan a celebration in a cemetery. But this celebration is timid in comparison with the one that is being planned for the future. Many more graves will open . . . many more knees will bow . . . and many more seekers will celebrate.”

This is one party I will not miss! No more unjust judges or lying accusers. No more dirty tricks, betrayals, financial struggles, or physical pain. No more difficult days and lonely nights. No more sin and no more death. And as with Mary at the tomb, no more crying–just an eternity of one surprise after another as we celebrate the Lord’s goodness and unfailing love.

Hope to see you at the party!