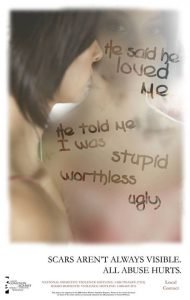 Dating violence is a real and serious danger. It is one of the major sources of violence in teen life. In 1991, studies indicated that dating violence affected at least one in ten teenage couples (Levy 1991). Today, that number has increased to one in every four! Although the majority of dating violence victims are female, there are some young men who are victims of abusive girlfriends who use emotional and verbal abuse to control and intimidate.

Many teenagers interpret their partner’s possessiveness and violent behavior as a sign of love. They have either seen violence as a way of life at home, or they have not been taught about healthy relationships.

Meredith Blake, founder of Break the Cycle, (a non-profit, legal services organization in California) believes that “we as a society in general and the legal community in particular, will not make any significant, long-term impact on the prevalence and devastation of domestic violence unless and until we focus our attention on our children.

“By teaching teens early on what constitutes a healthy vs. an abusive relationship, crimes and consequences, legal rights and responsibilities, we are able to assist teens in making safe and healthy choices.

“This preventative education also enables teens that have grown up in violent homes to challenge that learned behavior and choose a different lifestyle. For those teens that may already be in an abusive relationship, this early education helps both abusers and victims to understand the consequences of their actions and the options available.”

Dating violence is not just physical abuse—it also includes verbal and emotional abuse, described by psychotherapist Jill Kaplan as the “systematic degradation of a soul.” The abuse also takes the form of obsession and possessiveness. Many girls are controlled by their boyfriends via cell phones so they can check in with them several times a day and night.

A 14-year-old girl in the ninth grade talked to her controlling boyfriend on the phone seven or eight times a night. Her mother overheard her hysterically begging for forgiveness and pledging her love to him over and over. The girl eventually tried to commit suicide after a fight with her boyfriend because she thought it would get his attention.

Here are a few of the warning signs to help parents and teens recognize abuse in a dating relationship:

Does your boyfriend . . .
monopolize your time and attention, and prevent you from hanging out with friends and family?

check up on you, make you check in with him, go through your purse?

act extremely jealous or possessive, want to know where you’ve been and who you’ve been with, accuse you of cheating on him?

use aggressive behavior in other areas of his life (punches holes in walls, gets into fights)?

blame you for bringing out the worst in him, convince you it’s all your fault, blame you for how he feels or acts?

make you feel you can’t do anything right, and no one else would want you?

tell you how to dress or how much makeup to wear, scold you for wearing your hair a certain way?

isolate you from family and friends?

embarrass or make fun of you in front of your friends?

have an explosive temper or dual personality?

use drugs or alcohol excessively?

put down your accomplishments or goals?

use intimidation or threats to get his way?

threaten to hurt you or somebody you care about?

pressure you into having sex or going further than you want to?

break things or throw stuff at you?

make you feel there is no way out of the relationship?

threaten suicide if you break up?

try to keep you from leaving after a fight or leave you somewhere to teach you a lesson?

have a history of abuse in his family?

call you names and use verbal abuse to intimidate you?

bring you flowers and act romantic after each violent argument and promise never to hurt you again?

Many teenagers don’t tell their parents about an abusive relationship because they are confused about what constitutes abuse, they don’t want to lose their freedom, and fear they cannot get another boyfriend.

Dating violence affects the entire family and takes them on an emotional roller coaster ride which lasts long after the relationship has ended. The wise parent will actively seek to strengthen communication between themselves and their teenagers and learn to watch for danger signs.