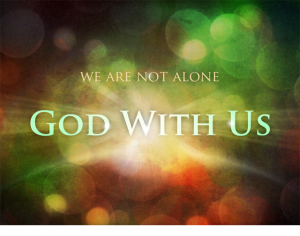 “One raw winter night a man heard an irregular thumping sound against the kitchen storm door. He went to a window and watched as tiny, shivering sparrows, attracted to the evident warmth inside, beat in vain against the glass.
Touched, the farmer bundled up and trudged through the fresh snow to open the barn for the struggling birds. He turned on the lights, tossed some hay in the corner, and sprinkled a trail of saltine crackers to direct them to the barn. But the sparrows, which had scattered in all directions when he emerged from the house, still hid in the darkness, afraid of him.

He tried various tactics: circling behind the birds to drive them toward the barn, tossing cracker crumbs in the air toward them, retreating to his house to see if they’d flutter into the barn on their own. Nothing worked. He, a huge alien creature, had terrified them; the birds could not understand that he actually desired to help.

He withdrew to the house and watched the doomed sparrows through a window. As he stared, a thought hit him like lightning from a clear blue sky. If only I could become a bird–one of them–just for a moment. Then I wouldn’t frighten them so. I could show them the way to warmth and safety. At the same moment, another thought dawned on him. He had grasped the whole principle of the incarnation.

A man’s becoming a bird is nothing compared to God’s becoming a man. The concept of a sovereign being as big as the universe he created confining himself to a human body was–and is–too much for some people to believe.” –Story by Paul Harvey

When Jesus came as a baby in a manger, He was called Immanuel–God with us. God with skin on. Have you ever thought about the many things Jesus experienced during his life on earth that relates to us today?

He knew what it meant to be poor. Imagine what it must have felt like to sleep on a bed of scratchy straw instead of a satin-lined bassinet. Rather than being surrounded by stuffed animals with brightly colored bows of satin, he occupied the same room with baying burros and mooing cows.

He experienced the pain of being misunderstood and rejected by those he loved. Jesus’ own half-brothers rejected his claim to be the Messiah. It was not until after the resurrection that they finally believed. Jesus knows how it feels to live without the approval of family and friends. He knows the sorrow of being rejected and despised by those he loves.

He knew the frustration of dealing with closed-minded religious leaders. Have you ever been wounded by a pastor or church leaders who are more concerned with being right and religious than meeting the needs of hurting people? Jesus had similar dealings with the Pharisees who followed the law to the very letter, but whose hearts he described as whitewashed tombs containing dead men’s bones. They looked good on the outside, but lacked compassion and Christian love on the inside.

He understands what it feels like to be judged unfairly and be slandered by cruel lies. When Jesus stood before Pilate, he was falsely accused by the very people he came to save. Instead of ranting and raving to prove his innocence, he simply told the truth and let people choose whether or not to believe him.

He knows what it feels like to have a body that gets hungry and tired, and he knows the trauma of being brutally beaten. Jesus’ body was subject to the same limitations as ours. He got hungry and thirsty, tired and worn out. After his trial, he was slapped, beaten with a whip, and forced to wear a woven crown of sharp thorns which pierced his skin and dug into his forehead. The prophet Isaiah says his face was so marred that he was unrecognizable. He experienced the rage of angry men and the pain of cruel fists.

He knows what it feels like to be abandoned and alone. Have you ever felt totally alone with no one there for you? Jesus felt that way in the Garden of Gethsemane after his friends abandoned him. He knew the ultimate pain of abandonment as he hung on the cross and cried out, “My God! My God, why have you forsaken me?”

He knows how it feels to die, and then rise again from the dead! Even when we face death, Jesus understands what we are going through. He is the only one who can give us comfort and hope because he conquered death and hell when he rose from the grave. When we receive his free gift of love, we have the assurance of living with him forever. In the words of gospel singer, Jake Hess, “Death ain’t no big deal!”

No matter what you are going through, Jesus understands. He’s been there. He knows. He cares!

He is Immanuel–God with us!