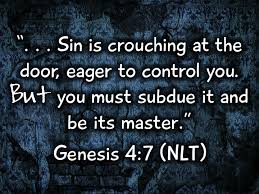 When they grew up, Abel became a shepherd, while Cain cultivated the ground. 3 When it was time for the harvest, Cain presented some of his crops as a gift to the Lord. 4 Abel also brought a gift—the best portions of the firstborn lambs from his flock. The Lord accepted Abel and his gift, 5 but he did not accept Cain and his gift. This made Cain very angry, and he looked dejected.

6 “Why are you so angry?” the Lord asked Cain. “Why do you look so dejected? 7 You will be accepted if you do what is right. But if you refuse to do what is right, then watch out! Sin is crouching at the door, eager to control you. But you must subdue it and be its master.”

8 One day Cain suggested to his brother, “Let’s go out into the fields.” And while they were in the field, Cain attacked his brother, Abel, and killed him.

9 Afterward the Lord asked Cain, “Where is your brother? Where is Abel?”

“I don’t know,” Cain responded. “Am I my brother’s guardian?”

13 Cain replied to the Lord, “My punishment is too great for me to bear! 14 You have banished me from the land and from your presence; you have made me a homeless wanderer. Anyone who finds me will kill me!”

15 The Lord replied, “No, for I will give a sevenfold punishment to anyone who kills you.” Then the Lord put a mark on Cain to warn anyone who might try to kill him. 16 So Cain left the Lord’s presence and settled in the land of Nod, east of Eden.

Why did God reject Cain’s offering? Some theologians believe it had to do with the offering being a grain offering instead of a blood offering, but grain offerings were acceptable under the law of Moses several years after Cain (Leviticus 2, Deuteronomy 26:1-11).

Others believe it had to do with the quality of the offerings–Abel’s was the very best of his flock while Cain’s was “some” of his crops.

What if the problem wasn’t with the offering but with the heart of Cain? Warren Wiersbe writes, “Cain wasn’t rejected because of his offering, but his offering was rejected because of Cain: his heart wasn’t right with God. It was ‘by faith’ that Abel offered a more acceptable sacrifice than Cain (Hebrews 11:4), which means that he had faith in God and was right with God. The most costly sacrifices apart from the submission of the heart can never make the worshiper right before God.”

When God rejected Cain’s offering, Cain responded with anger. At whom was he angry? If he had been angry at himself, he would have repented and made things right with God. Perhaps he was angry at God, but the main target of his anger was Abel. Marci Preheim writes, “He killed Abel because he could not kill God.”

Have you ever been the recipient of someone’s anger because they were envious of you? It’s a sad thing to watch someone being overtaken by envy. They attempt to destroy the person they envy with slander and malicious lies, and it ultimately ends up destroying them.

Cain allowed his envy to turn into rage, which eventually turned into murder. God spoke to Cain and counseled him to do what was right, giving him a second chance. He warned Cain that sin was crouching at the door (think of a hungry lion or tiger) waiting to control and devour him. He advised him to subdue the beast and become its master.

Paul wrote, “Anger gives a foothold to the devil.” (Ephesians 4:27)

What is the beast crouching at your door that you need to master?

Are you working with God to transform your mind or are you resisting the Spirit’s conviction as Cain did?

Instead of allowing God to help him, Cain allowed his anger to consume him with premeditated thoughts of murder. “He probably murdered his brother in his heart many times before he actually committed the deed.” (Wiersbe)

The beast was no longer crouching at Cain’s door. It was living inside his home as lord of the manor, king of the castle, master of Cain. The evil that began as a seed in Cain’s heart took root as envy, but yielded a harvest of hatred, lies, and murder.

“He lied to his brother when he enticed him to the place where he killed him. He lied to himself in thinking that he could do such an evil deed and get away with it. Cain even tried to lie to God and cover up his wicked deeds!” (Wiersbe)

“The more you think about Cain’s sin, the more heinous it becomes. The murder wasn’t motivated by sudden passion; it was carefully premeditated. Cain didn’t kill a stranger in defense; he murdered his own brother out of envy and hatred. Furthermore, Cain did it after being at the altar to worship God and in spite of God’s warning and promise. Finally, once the horrible deed was done, Cain took it all very lightly and tried to lie his way out of it.” (Weirsbe)

When God’s judgment fell on Cain’s head, he did not repent. His concern was for himself, with no remorse for what he had done. He became a marked man without a home.

“I always thought it [the mark of Cain] was something really bad–pointing out the bad guy, labeling him as evil. But it’s actually something completely different. It is God’s promise of protection for Cain. It’s not a branding of him as a sinner; it’s branding him still as a son in spite of his sin. It’s a dad saying even though he has made mistakes, he is still mine, and if you mess with him, you mess with me.

“Even in our time of discipline, God still has good planned for us. Even when he lets us experience the result of our sin, he desires our protection.

“God the judge is never separate from God the lover. He is always both.” (Todd Agnew)

In Jeremiah 32:40-41 it says, “I will make with them an everlasting covenant, that I will not turn away from doing good to them. And I will put the fear of me in their hearts that they may not turn from me. I will rejoice in doing them good, and I will plant them in this land in faithfulness, with all my heart and soul.”

Whatever is going on in our lives, whether it is tragedy or blessing, God is committed to working for our good. Many times my definition of “good” and God’s are very different, and sometimes God’s good for me doesn’t feel very good. But his purpose is to reduce us from our self-absorbed ways and release us to love.

My friends, we all have a beast crouching at our door, waiting to devour and destroy us. This beast cannot be conquered by church attendance or good intentions or a belief that God exists. It requires more than we can do on our own. We need a Savior who has already won the battle, the Spirit who convicts us of sin and guides us into truth, and a Father who always has our backs, who is “for” us.

The outcome will come down to our choice: Will we choose by faith the life God offers us or will we choose to live life on our own terms?

* Say, “Lord, I love you.”
* Thank God for his inexhaustible mercy and love.
* Ask God to help you master the beast threatening to devour you.