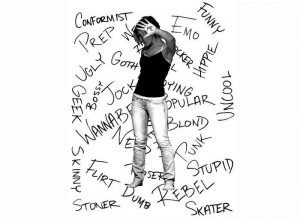 Why do we label people? While having dinner with a friend, she referred to people by using labels instead of names. She talked about the “tall, heavy set” man at church, the “black” woman at the market, and the “fat” woman at work. Why do we talk like that? How many times have you heard a Caucasian person referred to as “that white woman?” Very rarely, I suspect. Yet we talk about people of other races, shapes and sizes by labeling them in disrespectful ways.
Since God is not a respecter of persons, I decided to check out the Bible to see how people were referred to when their names were not mentioned. Very rarely was a person defined by their physical characteristics. Of course, there are exceptions like Sarah, David, and others, but it was to further explain the rest of the story. For example, Sarah was described as a beautiful woman so we would understand why the Pharaoh became interested in her. David was described as ruddy and shorter in stature than his brothers so we would understand why he was chosen to be king based on his heart, not his outward appearance.

For the most part, people without identifying names are referred to in the Bible by their situations in life, their occupation, their family name, or by their home town. The story about the Samaritan woman does not tell us anything about her appearance . . . perhaps because it didn’t matter whether she was tall or short, fat or skinny, blonde or brunette. Others were referred to as the blind man or the widow woman or the man who was demon possessed.

If we referred to people in those terms today instead of focusing on their outward appearance, perhaps our references would sound something like this:

Did you see the man in church today who beats his wife? Maybe we should send a group of men to get to know him better and help him deal with deep spiritual issues in his heart.

What about the lady who has been recently divorced for the third time? Perhaps we should invite her to lunch and find out what we can do to help her through this difficult time.

We are a culture obsessed with outward appearances and personal status. Even in our churches, people are often ostracized and devalued because of their height, weight, or lack of style and grace. They are rarely included in social circles or leadership teams because people refuse to look beneath the exterior to know the real person who lives inside.

And yet others are elevated to celebrity status because of the way they look or perform. People flock to get to know them because it elevates their own sense of importance by hanging out with the beautiful people.

Why don’t we just stop putting labels on each other and get to know one another on a deeper level. We might find out that the “tall, heavy set” man’s name is Joe, and he has a great sense of humor and a big heart of compassion for people who are hurting. You might learn that the “black” woman’s name is Anna, and she is a brilliant business woman who could teach you something about finance and investments.

It might surprise you to learn that the “divorcee’s” greatest desire is to find someone she can trust as a life partner who won’t abandon or abuse her. And if you get to know the “fat woman,” you may discover someone who is lovable and full of God’s mercy who can teach you humility and kindness.

What about labels for the people who label people: exposing the contemptuous man who won’t speak to his sister because she is overweight; the prideful woman who wouldn’t be caught dead hanging out with . . .

There’s one label mentioned in the Bible that is still relevant today—Pharisees. Those are the self-righteous people who pick and judge and diminish others so they will feel better about themselves. What did Jesus call them? White-washed tombs—looking great on the outside, but dead as a door nail on the inside. Dead people trying to look alive by sucking the significance out of others—sounds “crazy” to me!

God, forgive me, a Pharisee, for labeling other people instead of getting to know them. Help me see beyond the physical attributes to their real beauty inside. Forgive me for settling for shallow relationships and help me learn to go deep so I can celebrate the treasures inside people who are made in your image.